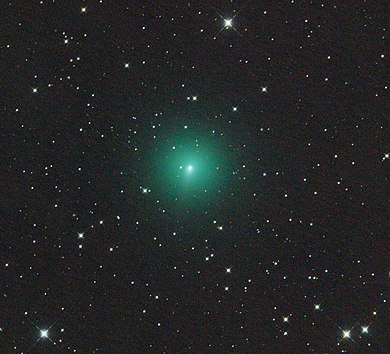 These two Hubble Space Telescope images of comet C/2019 Y4 (ATLAS), taken on April 20 (left) and April 23, 2020, provide the sharpest views yet of the breakup of the solid nucleus of the comet. Hubble’s eagle-eye view identifies as many as 30 separate fragments. Hubble distinguishes pieces that are roughly the size of a house. Before the breakup, the entire nucleus of the comet may have been the length of one or two football fields. Astronomers aren’t sure why this comet broke apart. The comet was approximately 91 million miles (146 million kilometers) from Earth when the images were taken.
Credits: NASA, ESA, STScI and D. Jewitt (UCLA)    More Information here

We have no idea if there will be anything to view by the end of May now, but we will be looking 🙂

C/2019 Y4 is a near-parabolic comet that was discovered by the ATLAS survey on December 28, 2019 in Hawaii, which made it the last comet discovery of that year. The comet has a similar orbit to the Great Comet of 1844, leading to speculation on whether C/2019 Y4 is a fragment of the same parent body as the 1844 Comet.

If it looks like we can observe the Comet in a group, 3 morning times will be listed to observe the comet from one of the best vantage points in the district, so keep an eye on this page for updates.

Below are finder maps for 3 different times, green areas are not visible from Ballarat ie below the horizon at the given time. These maps are now out of date and will load new maps if we can see anything!