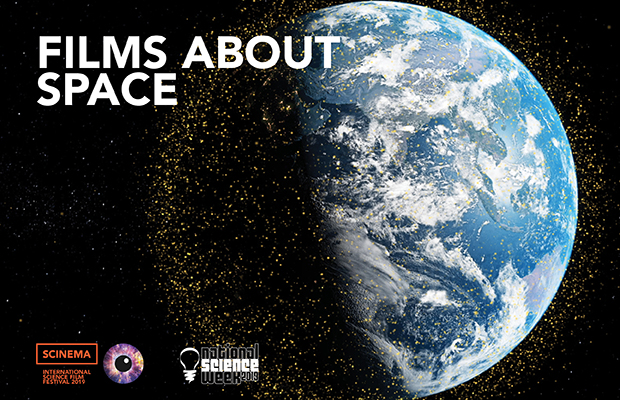 OZONE HOLE: HOW WE SAVED THE
PLANET (United Kingdom) 55:55 minutes
Directed and written by Jamie Lochhead
Produced by David Dugan,
Charlotte Hunt-Grubbe
The remarkable story of the hole in the ozone layer – and how we managed to fix it. The first time we faced a catastrophic, man-made threat to the planet’s environment, Ronald Reagan and Margaret Thatcher took action. The world followed their lead and came together to sign the Montreal Protocol – the first global treaty to reduce pollution. It worked. Today, the ozone hole is showing signs of recovery. As climate change begins to feel like an impossible
challenge, this story – told by the folks who persuaded Maggie and Ronnie to regulate industry – offers a message of hope.

8.00pm
WHERE DOES SPACE BEGIN?
(United Kingdom) 2:25 minutes
Directed by Katie Steed
Produced by Aaron Wood
Written by Dhara Patel and Dr Greg Brown
Have you ever wondered how far away space is; how high must we climb before we can claim to be “in space”? Join the Royal Observatory Greenwich astronomers as they ascend through the different layers of the Earth’s atmosphere to reveal the wonders that lay beyond. Suitable Primary School children.

KESSLER SYNDROME: WHAT HAPPENS WHEN SATELLITES COLLIDE? (Canada)
13:31 minutes
Directed and written by Asher Isbrucker
Of all the man-made satellites in Low Earth Orbit, 95% are space junk – rocket thrusters, derelict satellites, and most of all, fragments
of debris from collisions and explosions. All this debris poses a potential threat to the future of space travel if we don’t find a way to clean it up before it’s too late. Kessler Syndrome, the threat of cascading orbital debris fallout, an environmental crisis that’s almost completely invisible to us, but which may carry dire consequences for our infrastructure and the future of spaceflight if left unchecked.

SPACE TO EXPLORE 13:58 minutes
Natalie Panek, an aerospace engineer, pilot, and avid explorer, has spent her life focused on her biggest dream – to be the first to set foot on another planet. On an outdoor adventure to the Mars-like terrain of Moab, Utah, she searches to reconcile life’s stumbles, redirections, and challenges in the pursuit of space travel as she designs the next Mars rover. In the face of sky-high arches and pinnacles, breathtaking views, and a canopy of stars, it’s easy to believe the sky has no limits. Suitable Primary School children.

CHASING THE JETSTREAM (United Kingdom) 1 hour 14 minutes
Directed and produced by Claudio von Planta
Chasing the Jet Stream follows the adventures of Marc Hauser, an entrepreneur from Switzerland, who wants to be the first skydiver in the world to jump into the jet stream to establish a new horizontal speed record and bring attention to the new technology of airborne wind energy systems. A technology that has the potential to help solve the global energy crisis.