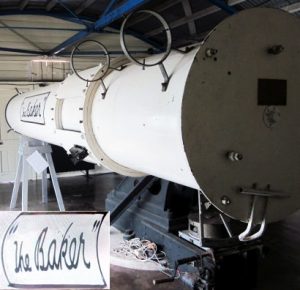 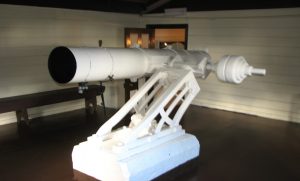 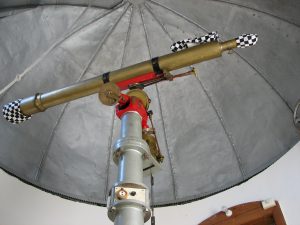 The Federation Telescope
A 410 mm reflecting telescope with classical Cassegrain configuration, and has an effective focal length of 6.6 meters. The inclusion of two additional optical flat mirrors mounted at the intersection of the axes of rotation of the mounting provides for a stationary eyepiece. This feature and its ground level siting means that anyone, including the elderly and wheel-chair users, can easily and comfortably observe the wonders of the cosmos.

Telescope with designer Barry Adcock (ASV, BAS), who led a team in its construction.
The Federation Telescope project was made possible by a Commonwealth Federation Community Projects Program Grant, together with widespread and strong support from BAS volunteers and the Ballarat Community. 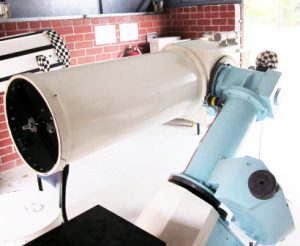 The Thompson
In May 1998, the Society completed a 31.5cm (12.5-inch) Newtonian reflector, which was left unfinished by Ian Thompson. As well as his passion for Astronomy and the Ballaarat Observatory, Ian was a keen supporter of the Collingwood Football Club – the telescope has been finished in Collingwood’s “Black and White.”

In 1997, a 25cm (10-inch) portable reflector was donated to the Society by the parents of the late Ian Thompson, a hard-working and dedicated Society member for 28 years.
Suitably qualified members may operate any of these instruments.
In addition, the Society has portable telescopes which may be borrowed by members for a month at a time, for use at home.