The radiant is just below Betelgeuse in Orion.
October’s 5 day old Moon nicely treats the Orionid peak to dark skies this year. The shower’s radiant, near the celestial equator, is at a useful elevation by local midnight or so in either hemisphere, somewhat before in the north, thus most of the world can enjoy the shower. Each return from 2006 to 2009 produced unexpectedly strong ZHRs of around 40–70 on two or three consecutive dates. An earlier IMO analysis of the shower, using data from 1984–2001, found both the peak ZHR and r parameters varied somewhat from year to year, with the highest mean ZHR ranging from ∼ 14–31 during the examined interval. In addition, a suspected 12-year periodicity
in stronger returns found earlier in the 20th century appeared to have been partly confirmed. slowly increase again (about 20+ in 2017).
The Orionids often provide several lesser maxima, helping activity sometimes remain roughly constant for several consecutive nights centered on the main peak. In 1993 and 1998, a submaximum about as strong as the normal peak was detected on October 17/18 from Europe, for instance. 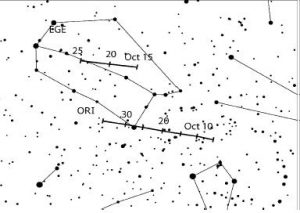